Waiting for SKALD: Against the Black Priory, a classic RPG a la Ultima and The Magic Candle 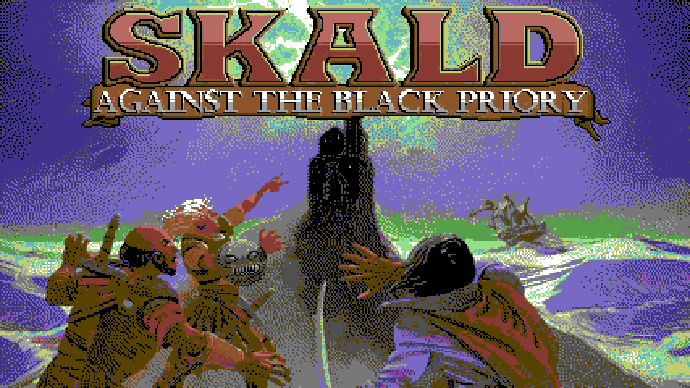 It turns out that this is also the case. Quiet family-oriented Norwegian indie developer Anders Lauridsen, enlisting the help of artist (author of the beautiful C64 platformer The Wild Wood) John Henderson and musician Surt Romanus, has been quietly creating a unique CRPG, a kind of homage to the old games of the Ultima and The Magic Candle series, under the pretentious title SKALD: Against the Black Priory. Moreover, the game has already successfully passed two crowdfunding campaigns in the same year of 2019 (on Kickstarter and on IndieGoGo) and is about to get out of the closed beta stage and be released in early access. But first things first. 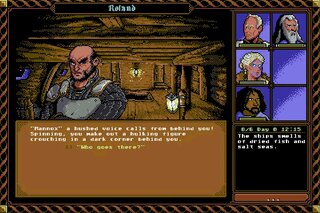 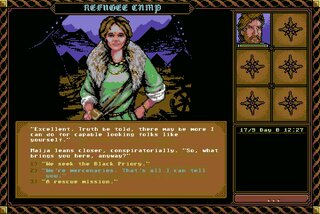 The birth of interactive computer programs about fantasy worlds, in which the player is required to perform some role (role-playing games) in all the variety of available actions and consequences, games more complex than twenty-five-cent "pongs" or video shooters, began with attempts to adapt the rules of the respective board adventures by geek enthusiasts. And in those days, the rulebook of all things fantasy - the ubiquitous and (still) suggestive codex Advanced Dungeons & Dragons - almost solely dominated. From there came, for example, parties as groups of several characters, with mandatory levels, characteristics and equipment, formulas for calculating combat encounters and accidents, as well as intricate scenario ideas born in the heads of intricate Game Masters. A modest contribution was made by our old acquaintance, John Ronald(ovich) Ruel Tolkien, who with his monumental work inspired a whole horde of young heroes dreaming of fairy-tale worlds, beautiful elves and powerful wizards.

And with the development of computing power of those first CRPG began to gradually evolve - to outfit the mechanics and stories. Scenarios began to branch out with intricately woven denouements. Systems were enriched with features and interconnections, bringing the games closer and closer to the real simulations of staying in fantasy worlds. True, over many moments you had to sweat a lot, just to guess - to unravel! - what exactly the authors wanted the player to do. But this was also part of the idea. Those were games by geeks and for geeks: beautiful in content and completely inaccessible to most. You either became a geek or quit the game because of the difficulty and incomprehensibility. What's more, you can appreciate the peculiarities of passing classic CRPGs yourself, as they say, firsthand (since 1975 and the PLATO mainframe) from the amazing CRPG Addict.

Over time, the CRPG genre began to deflate, moving away from a geek interest in intricate adventures - more and more - to a mass entertainment show format. Until, finally, in modern times, it merged ecstatically with other genres, bringing them now only a veneer of former role-playing non-trivialities. But the geeks remained. And the paltry crumbs to them--to us! - not enough, very little... That's where Comrade Lauridsen comes in with his SKALD: Against the Black Priory!

The author writes: "this is a classic camping RPG whose events take place in a dark and gritty fantasy world full of tragic heroism, brutal doom, and mystical, Lovecraftian horror. The dark, addictive narrative is inspired by such legends as Ultima and the AD&D Gold Box Adventure Series. This is my declaration of love for classic RPGs."

The player will lead a group of up to six characters on their wanderings through the dungeons and underground passages of the hideous Black Priory. The game promises to be both challenging and interesting - with tactical battles, a system of dynamic branching dialogues and small text-based scenario sketches similar to a playbook with a choice of actions. At the same time, the skills and qualities of the chosen group leader will strongly influence what happens. 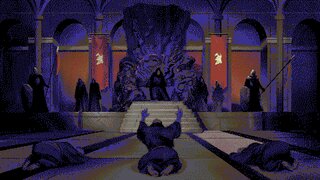 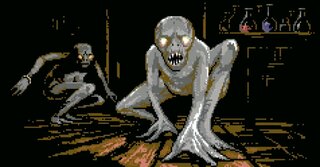 The Gallian Empire is in turmoil: by the virtue of the Mage Rulers, the empire has lasted a thousand years. Now its foundations are bursting at the seams. Right now, the ruling elite is rapidly losing its jealously guarded monopoly on the use of magic. And without it, entire hordes of enemies threaten the existence of all humanity.

On the remote island of Idra sits the Black Priory. Its great libraries were once used to educate and teach wisdom. But these days its halls overlook far darker practices. Our presently reigning Magus-Lord dispatched a detachment of his most elite knights to seek Imperial justice to punish the deeds of the members of the fallen monastery's cult.

Almost all was lost, however, when a storm struck the ship carrying the knights. All but one of them perished: you. Thrown ashore on the bloody island, you are now the people's only hope for Imperial justice. Gather as many allies as you can, and prepare to face the Black Priory - may your mind stand! 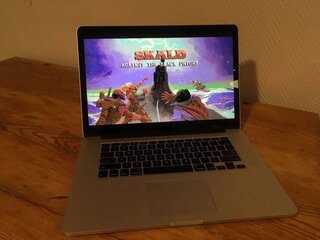 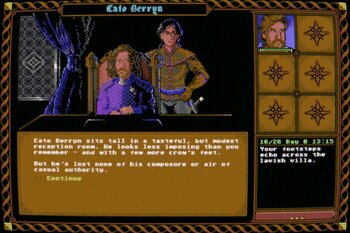 What the game promises us:

In addition, according to the author, SKALD will become a brand, as well as an entire RPG-adventure ecosystem from the community of game masters. A system of three components: 1) a rulebook, including one suitable for tabletop games; 2) a game engine for creating playbooks, interactive literature (visual novels) and role-playing games with lots of narrative through text; and 3) games that use the SKALD engine. It is also intended to use procedural generation techniques for part of the content of the modules to adapt to what is happening and to bring variety in cases of replay.

The Skalds were Scandinavian warrior-poets in Viking times during the Middle Ages. They served in the court of the yarls, where they composed and performed epic poems retelling the heroic exploits of their leader.

About all of this you can read in detail on the SKALD role-playing system website, but we briefly summarize its current capabilities (the author maintains a detailed blog, including philosophical musings on the various mechanics in role-playing games):

As you can see, there is a sense of seriousness and a love of deep role-playing. It may not come to sowing wheat, reaping and baking bread like in Ultima (but who knows?), but all of the above sounds like a balm for true role-playing geeks.

Anders laments the abundance of magic in Forgotten Realms: "If the world is so full of magic, it stops making sense. I'll take the following principles of magic as my starting point: it is rare and powerful or considered so; it is poorly understood and considered a secret doctrine; as a result it is either used as a political resource or violently persecuted; thus magic becomes a fundamental force that influences history, roughly like religion in Medieval Europe; now imagine if the Catholic Church had fireballs; magic is not free to whoever uses it, it degrades body and mind; magic in the world is limited and only serves the very rich and powerful."

In an interview with RockPaperShotgun of October 30, 2019, Anders Lauridsen, then still under the pseudonym Al, said the following about the future game: the game is not made for money; money from crowdfunding campaigns went for taxes, for the Unity license, for a good computer and to pay freelancers artists and musician (and it was worth every penny); the interface of interaction with the world and with inventory in the game will be "mouse", in contrast with the classic CRPG with their lists of titles and endless key commands, like pressing the "Q" key to volley drink potion or the key "O" to open the door; you can save anywhere in the game; it is important to maintain the feel of old CRPG, but do not blindly copy their naive design ideas; it is also important that the game not turn out to be a stylish dud, but bring something new to the genre, some new level of reflection; the game will be easier to handle than the old CRPGs and generally play faster; the biggest difference between games then and now is respect for people's time; there may be a "narrative" level of difficulty with a focus on storytelling; the game will be modest in scale.

Mr. Lauridsen is a family man with two children living somewhere "high up north in a very, very rural part of Norway," in a town of a few hundred residents. He hasn't told his neighbors or co-workers about his "secret" life as a game developer. And SKALD is the latest in a series of home projects he's created for his own pleasure. And so far the only one he plans to release. 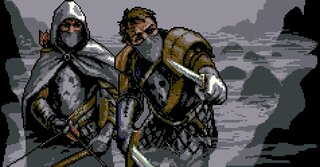 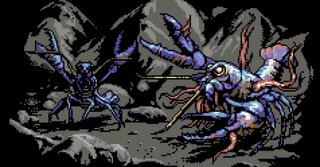 After successful crowdfunding campaigns in 2019 - on Kickstarter the entire amount of 70 thousand NOK (about 620 thousand rubles) was raised on the first day, and in total managed to raise about 184 thousand NOK, and on IndieGoGo about 30 thousand euro - several demo alpha versions were released, and in 2020 a closed beta testing began. Additional funding was also provided by the Norwegian government as part of the Innovation Norway program. At the moment the author is going to finish the press version and release the game in early access for all players. A page on Steam is already being prepared, and recently it was reported that the game was supported on GOG, where it should also appear.

Regarding the delay from the originally planned "Fall 2020" Anders writes the following: "It's no secret that I was hoping to release early access by the end of 2020. And obviously that's not going to happen. Including because of the time it took to move the battles from individual arenas to the main map. However, it had to be done. Monetary security after successful campaigns allowed us to set higher narrative goals, and good works take time. But not to worry. The project is in great shape. The finances are ample and there's no reason to rush into it unnecessarily. The development process is already going as fast as humanly possible."

Listen, by the way, to the game's main musical theme:

Surt R. · Against The Black Priory

By the way, the author knows about the already released Nox Archaist, about which we recently wrote and even called to "show some love" to this somewhat similar, but also very different game in his blog.

Anders Lauridsen plans to finish the press version in the first quarter and release it in early access in the first half of 2021, sometime in summer. So we can already get ready for this momentous event! If you can't wait to try the game right now, you can still join the IndieGoGoGo campaign as a backer. It's true that the physical stuff (like a nice box, tutorial, cloth world map, and small merchandise) is gone, but you can get the latest version of the game. And so far only for Windows.

You can also keep up with news on the game on Reddit, join the community on Discord (who sometimes get test versions too) or via Twitter. We also plan to keep an eye on this unique project and report important changes.