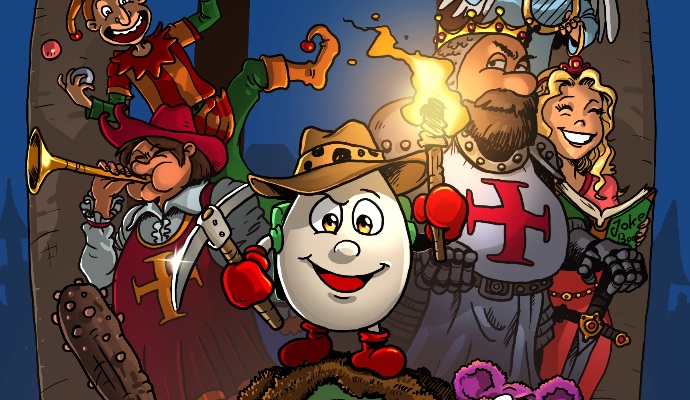 One of the biggest disappointments for erudite Dizzy fans - well, besides the absence of Fantastic Dizzy on Spectrum and the failure of Dizzy Returns on Kickstarter - was the cancellation of Dizzy The Adventurer for Mega Drive. More precisely, many people didn't know about this version at all, but those who were aware of it were tearing the last hairs on their heads in despair, because the game was out to be just great.

As you know, Dizzy The Adventurer first came out on the NES - it was a reworked version of Dizzy, Prince of the Yolkfolk. A few years later it was decided to port the game to Master System, Game Gear and Mega Drive, and as part of The Excellent Dizzy Collection. The work on it went well, and in March of 1994, the first two versions were released. However, by that time the relationship between the Oliver twins and the Darling brothers, who owned Codemasters, had finally soured. The Darlings were constantly delaying or not paying what they were promised, canceling projects left and right, changing the terms of cooperation, and so on and so forth. In the end, the Olivers refused to give Codemasters the final version of the compilation until they were paid at least the promised £20,000 advance (which, of course, didn't even come close to covering the development costs). 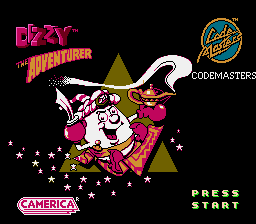 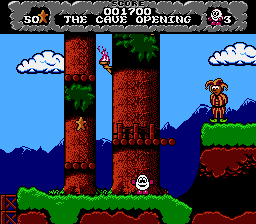 The Darlings refused - they didn't care about either Dizzy or the Olivers by then. By that time, their American partner Lewis Galoob Toys won a lawsuit against Nintendo for Game Genie cheating device and they were awarded a hefty $15m compensation, of which the Darlings themselves received around £2.5m and the device alone brought them an extra £2.6m last year. Dumbfounded by the bag of money, the brothers began to spend it on Ferrari, flying and helicopter lessons - in general, on anything but the people who made them famous (more about this can be read in the wonderful book The Story of The Oliver Twins). In the end The Excellent Dizzy Collection for Mega Drive never saw the light of day, it was 2011 when the Oliverses found a pile of cartridges, notes, floppies and other cool stuff in their attic and lent it all to Andrew Joseph, the creator and admin of Yolkfolk.com.

Among all this goodness, luckily, was a Dizzy The Adventurer cartridge. Andrew successfully launched it, recorded about 15 minutes of gameplay, posted the clip to the Net, and went quiet. In response to numerous questions, "What's up with the game?" replied that he is wildly busy with life, family and other things, and to requests to rent ROM with the game, said that he does not have such a device, because they are very expensive. But he would try and find one. Advice such as "Buy Retrode, it costs less than £ 60, or just give this cartridge to someone with such a device" was ignored by Andrew for some reason. Andrew ignored it for some reason. In the end, without getting anywhere, Andrew gave the cartridges back to the Oliver twins and the dream of saving Dizzy The Adventurer was put into a coma for six long years.

By the way, here's that ill-fated clip - so tantalizing and tantalizing:

Fortunately, sometime in 2017, if not sooner, the ice was broken again. Around the same time, the Olivers started to dig out their old games, finish them with the help of Lukasz Kura, and put them on the Net for free, while releasing them on cartridges (for money, of course). This is how Dreamworld Pogie, Mystery World Dizzy, Wonderland Dizzy and Panic! Dizzy were released. Still nothing was heard about Dizzy The Adventurer, and then Olivers announced Wonderful Dizzy, and all attention of fans switched to this game.

And then in mid-March, Yolkfolk.com's Twitter started teasing some sort of Grand Event, counting down the days to it. And on April 3, the Event finally happened - Andrew published the PC version of Dizzy The Adventurer, which was based on the failed mega-drive version.

It's worth saying right away that the game really turned out great - it's definitely one of Dizzy's most beautiful adventures. If it had come out in the 80's, it would certainly have won love from players and critics alike, thanks to its colorful graphics, rich animation, good music and interesting puzzles. In a sense, this is the perfect entry point into the world of Dizzy - the game is not very complicated, but also not too simple, besides, it is very exciting and looks favorably against even the most famous releases for Mega Drive. 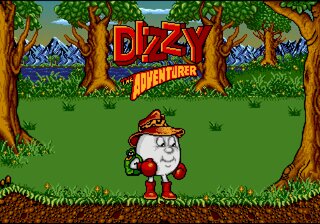 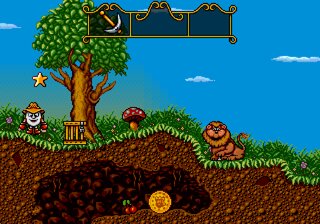 Fortunately, the release of Dizzy The Adventurer on PC brought its bonuses - the game has acquired a lot of chips inherent in modern releases. Here are just a few of them:

In general, visually and gameplay Dizzy The Adventurer feels like a very retro, but by convenience it is quite a modern game, which has a place in Steam, GOG or even somewhere on consoles. According to the Credits section, our old friend Lukasz Kurr was responsible for porting it to PC, and Andrew Joseph and Adam Markey (both from Yolkfolk.com) helped him out. Cal Carmone, Darren Yeomans and Marcelo Barbosa were responsible for the graphics, the music was written by the legendary Lyndon Sharp, and the modern remix was done by Kamil Rybak (Chip Jockey). The game, imagine, even has a Russian and a Polish version: the first was provided by Vladimir Chorev, and the second by Lukasz Kurr himself. 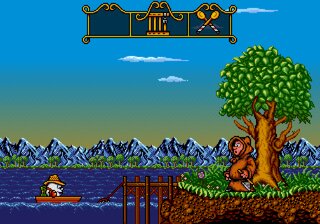 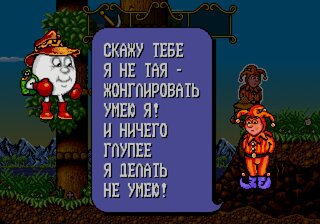 Right now, you can download Dizzy The Adventurer for free from the game's page on itch.io. Donations to the authors are strongly welcomed - after all, they have done a great job and brought us back the game, which for a long time was considered irrevocably lost. So download, play, donate, and let's all hope that this is not the last find in the world of Dizzy.

And now that all the links are published and the thank-you's are given out, I want to get a little perplexed.

Firstly, the game was originally released not for free, but for as much as £10 - and that's the digital version, not some flash drive or disc. Yes, it's a relatively small amount, but well above the average price of other paid fan projects. Plus, asking someone else to pay for pretty much someone else's work (the mega-drive version of Dizzy the Adventurer was in near-release condition) while all the other "saved" games from the Olivers and even the new Wonderful Dizzy were free is a little weird.

Of course every work deserves to be paid, but Dizzy's is a special case. Do not forget that the rights to Dizzy are half owned by Olivers and Codemasters (which is now owned by EA), and not least because all fan games are free, the Darling brothers did not have any complaints to their developers. Apparently, it was the negative reaction on the part of the Dizzy community that prompted Andrew Joseph to make Dizzy the Adventurer free with an optional donation just a couple days later. 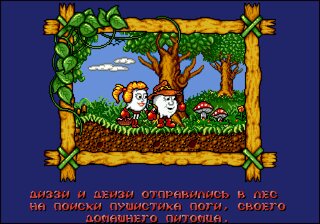 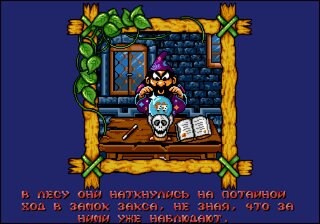 Secondly, there is almost no information about the development of the game, which, according to Andrew, lasted a long 4 years and was not easy. You'd think you could write a whole book or at least an article about it on your own site, but no way - short story about the cancelled educational game about Dizzy, but no one bothered to write about Dizzy the Adventurer. From all the information on Yolkfolk.com - link to itch.io yes a lonely forum thread with incorrect information about the reasons why the game didn't come out in the 80's.

Thirdly, the Olivers themselves mentioned this game on their Facebook page only 9 long days after its release, as if they found it on the Internet. They actively wrote about all the previous games they've found and even made YouTube videos, about Wonderful Dizzy they told many times in various formats too, but here is a dry repost of Andrew's record and that's it. Either the owner of Yolkfolk.com really didn't consult with them in any way (at least, The Oliver Twins are only mentioned in the credits as game designers and character creators), or there's something we don't know.

Fourth, neither Andrew nor the Olivers still released an ROM with a megadrive version, though apparently they did manage to squeeze it in. What's more - it's strange that no one tried to make just a console version of the game, because that would have been much more authentic. PC-release would not have prevented it, but rather complemented it. After all, if they had finished the game for the Mega Drive, it could have been released on a cartridge in a nice package and with a normal price tag. After all, even an unfinished version of the game is very important for the preservation of the gaming heritage. I want to believe that sooner or later it will be published.

Fifth, Peter Gratkevich, the permanent illustrator of all the official Dizzy games in the last 5 years, drew a great poster for the game, which no one has posted anywhere properly, unless you count an infamously overcompressed version on Facebook. Well, we'll have to do it ourselves: 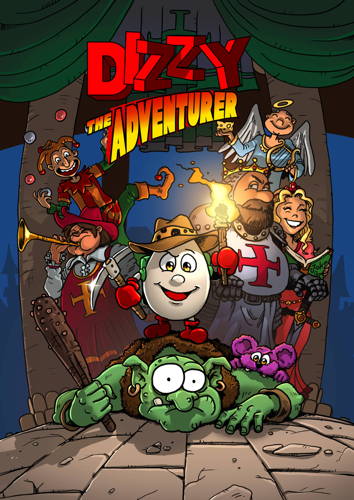 However, all this confusion and muttering can be safely ignored, because it's much more important that the long-awaited Dizzy The Adventurer for Mega Drive was finally released (even if it was slightly mutated on the way to the PC version), and one less lost project in the Dizzy world. Let's rejoice!

Firstly great article. Although I think that your speculation could be perceaved as fact regarding your points you have made.

Both myself, Adam and Lukaz jointly worked on the project and it had gone though many different itterations before the finished product.

There had been a time when we were going to go though steam to release it. Their greenlight programme fell though so we didnt get it submitted in time.

As for more Dizzy titles in the future.. never say never...