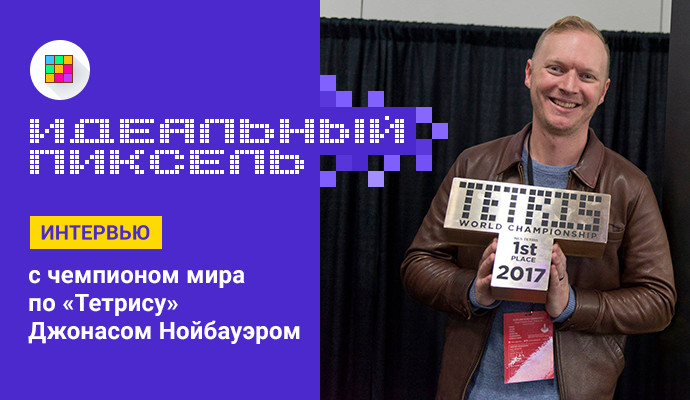 The Classiс Tetris World Championship (CTWC) takes place annually in the USA. No, it's not about that old game for the Soviet computer "Electronics-60" by Alexey Pajitnov, and not even for the more well-known version for MS-DOS, which Vadim Gerasimov ported to IBM-compatible machines. It’s about the classic Tetris by Nintendo, which was released in 1989 on the NES, sold 8 million copies around the world and to this day devours countless man-hours among fans of this game.

From 2010 to 2012 the championship was based in Los Angeles, after moving to Portland, under the wing of the Portland Retro Gaming Expo, and now Tetris masters from around the world are coming here every year. They play exclusively on CRT TVs and real NES (although the game itself is slightly modified — for a more honest competition). The championship does not last long: on the first day there is a qualifying round, beginning with level 9 (which in itself is not easy), and on the second day the 32 best players compete for the place in the finals — from the 18th level. For a normal person this is quite too much — the figures fall with a terrible speed, the levels change, and someone will definitely end with a Kill Screen at the 29th level. There are only 3 people in the world, who reached 30th level in Tetris, by the way.

But all of this started a bit earlier. In 2009, the talented player Harry Hong became the first man in the world, who scored maximum 999 999 points in Tetris. Inspired by this record, director Adam Cornelius made the short film "Max-out" and decided to go further: connected the Kickstarter service to raise money for a film about world achievements in Tetris. The community stirred up and information about other players who allegedly set the same record earlier began to appear. Adam Cornelius, with the help of experienced participants of the world championship Nintendo — Robin Mihara and Tor Akerlund — started to look for masters of Tetris all over the world. 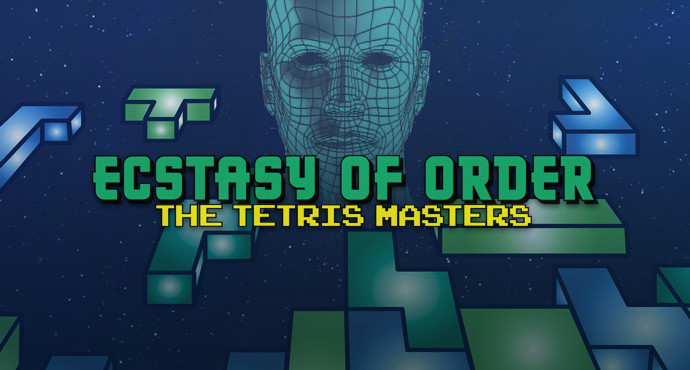 As a result there was the first world championship and a documentary about it: "Ecstasy of Order: The Tetris Masters". Movie tells the story of Tetris-pioneers of the championship: all of them have their own history, personal and professional problems and hopes. The bigger part of the film is displaying the tournament itself — a great opportunity to compare how much each player has grown since. And it’s really nice to look at those people, who were at the top of the tournament table of each championship for many years.

In 2010, the victory went to Jonas Neubauer. No one could predict, that later this man would lose in the battle for the first place only once, in 2014 — to Harry Hong. The second and the third places of the championship, year after year, are held by Harry, Alex Kerr (who fought desperately with Jonas in the finals of 2017), then Sean Richie. Jonas Neubauer holds the title of the absolute champion.

Now Jonas lives in Los Angeles, California, and manages a tasting room of a craft brewery in Torrance. He told the "Perfect Pixel", that right here, at work, he met his beloved wife Heather. We asked him, why Tetris became his most favorite game of all. Jonas said: "Tetris was the first game that I couldn't just beat and put down. Even today, I feel as though I haven't beaten it. I distinctly remember the challenge and frustration of trying to survive gameplay on level 19 <…> When it comes to video games, I prefer the journey over the destination... and Tetris is all journey".

Of course, being the best Tetris-player in the world is not that easy — you are constantly asked how organised you are, asked about couple of tactical tips, or even met with the phrase "Boom! Tetris for Jonas!". So, the "Perfect Pixel" itself, in case of the fact that Jonas recently turned 37 years old, decided to ask champion about something different — in the end, it transformed into a whole interview, sometimes personal and serious, and sometimes very funny. 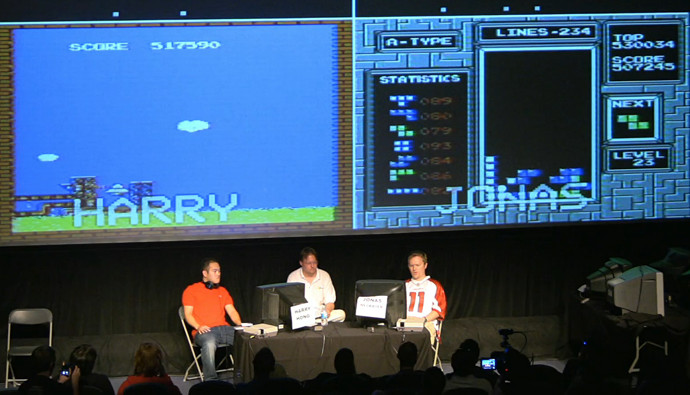 M: Hello, Jonas! Let me ask you some questions.

J: That would be great, Maria!

M: So, have you ever been asked to become a Tetris-tutor?

J: Yes, so many times that now on my Twitch channel, I offer personal game evaluations to paying subscribers - mostly Tetris games, which I break down play-by-play, and give suggestions based on their skill level.

M: Did other people recognize you on streets/shops/etc? If yes, what do they ask?

J: Very rarely. The few times I have been recognized, they usually asked me if I'm an organized person... which I am not.

M: Have you ever heard "Boom, Tetris for Jonas" from someone?

J: No, but I get it a lot from people on the internet, to the point where my Twitch channel has the "Boom, Tetris for Jonas!" as a sound effect the viewers can trigger.

M: Imagine, that you're giving an advice to someone who wishes to become a tetris-champione like you. What things might you say? Maybe, there's some tactical features you may call "cheats" or helpers. What level is the best to start from? How to relieve pressure?

J: I would recommend getting the original NES console and a CRT television so you can practice on the same setup as tournament players. Also, drink lots of black coffee. There are no shortcuts to getting better; it's just practice and getting used to level 18 and 19 speeds. If you're just starting out, start on level 9, then level 15, then 18 and 19. Before games, I drink coffee and focus on breathing.

M: How upset you are, when you loose? Have you ever broke something?

J: When I lose, I'm more disappointed than upset. I haven't thrown a controller in about 10 years. After my run of tournament wins, the CTWC for me now is more about having fun and being a part of a great community. 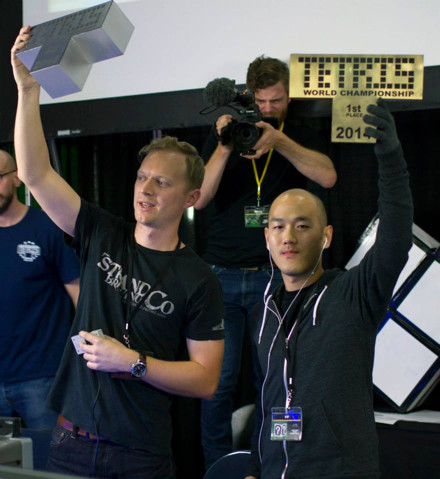 M: Recently you wanted to beat a 100-line record, but made another one instead. What is your most-wanted record ever?

J: 5 maxouts in a row. So far I've managed to get three in a row, on two separate occasions.

M: Sometimes it seems that you play better when your things in game are really not good. Is there any stress-mode, when you start to mobilize all your skills?

J: I think if things aren't going well and I'm far behind, it takes the stress off of having to play the line between safety and aggression. It allows me to go full throttle and make the quick/easy aggressive choices.

M: Do you have an electronic tetris (like Brick Game)?

M: How does it feel to win CTWC for the first time?

J: I felt relieved. And afterwards, there was a lot of press, and it was fun to do interviews and be in the local paper.

M: Last time, winning a champinship, you thanked your wife for being married to you. Please, give an advice - how to make the first move on a girl, using your tetris-skills?

J: Tetris gives you the ability to make quick, bold decisions without worrying about the consequences - so I would say, use that confidence to start a conversation and see where it goes.

M: Have you ever played the first Tetris, for DOS?

J: Yes, and it was not my favorite. 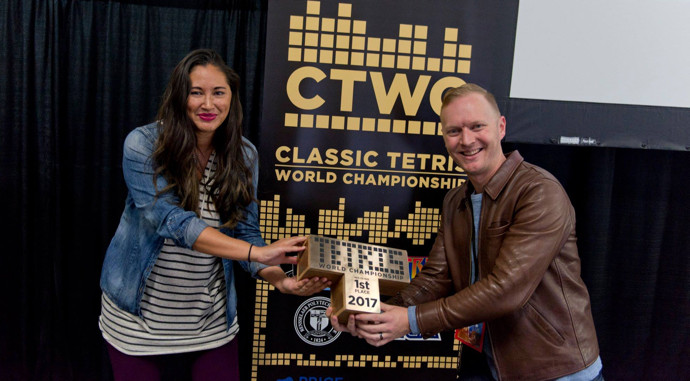 M: What games do you like at all? Modern, retro, any of them.

J: love The Elder Scrolls series, and I'm a fan of most original Nintendo and Sega Genesis games. I also loved Shadow of the Colossus, Portal, and right now I'm playing a lot of Dead Cells.

M: What games did you play as a child? On what consoles? Maybe, you have a story to tell - about your first gaming experience, for example.

J: Growing up, I mostly watched my older brothers play Atari video games. The first game I ever bought with my own money was Legend of Zelda for the NES. I remember burning and bombing every single tree and rock in the game because I was so determined to uncover all the secrets. I had the Nintendo Power magazines, but I preferred to discover the secrets on my own.

M: Do you visit foreign Tetris-events as a guest or a viewer? How often?

J: I’m hoping to go to my first European Tetris championship with my wife later this year! It's in Copenhagen, and we're trying to figure out if we can get the time off of work.

M: That’s wonderful news, hope to meet you both there! Thank you so much for answering my questions.

So, we’re finished with questions for Jonas. But there is another one — not for him. What if this article is so inspiring, that you suddenly want to play in real Tetris? Don’t worry, we’ve taken care of it.

For example, you can take it seriously and make things the way Jonas advised — buy a NES, a CRT TV and a game cartridge to feel like a real championship member. All components can be easily found on eBay and other similar sites.

If everything is not so serious, you should probably purchase a modern clone of this console — for example, RetroN HD, RES Plus, 8-Bit HD, AVS or Analogue Mini NT. You can, of course, buy some cheaper Chinese version, but at your own risk. Oh, and you'll still need a real cartridge with Tetris. 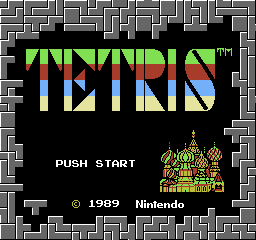 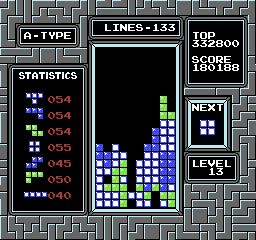 Finally, you can use an emulator — it feels different, but seems good for the first time. MacOS owners can download beautiful and multiplatform OpenEmu (https://openemu.org), and Windows owners — FCEUX (http://www.fceux.com/web/home.html), Nestopia UE (https://sourceforge.net/projects/nestopiaue/) or RetroArch (http://www.retroarch.com) (by the way, it's also multiplatform, uses the Nestopia UE kernel and exists for macOS). Tetris itself can be easily found on the Internet — search for keywords "NES", "Nintendo" and "ROM".

You better start from a lower level — 4th or 5th, at the same time testing whether this speed suits you. If it does — you can increase the difficulty, pumping your skills. After some time you’ll be ready to play at 8th and 9th levels, or even higher. To start, for example, from 15th level, hold down the "A" button on the gamepad and only after that press "Start".

You can also find your inspiration or get an invaluable experience by watching some videos of the Classic Tetris World Championship (https://www.youtube.com/channel/UC-8BAEcWSEs4-KQp1ULVnaQ/videos) — for example, how Jonas beats Harry Hong and other contenders during the finals.