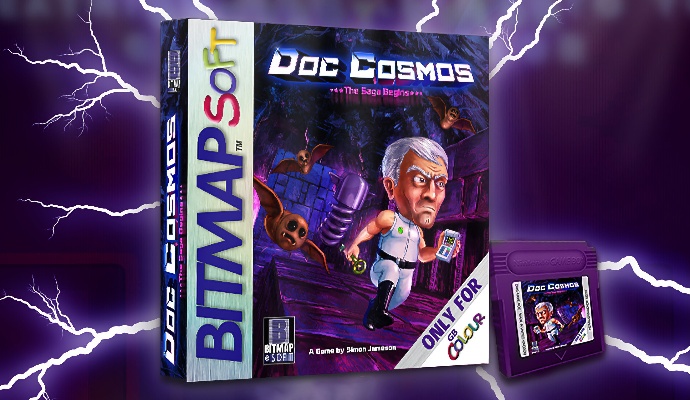 The peculiar puzzle-platformer Doc Cosmos, which won a prize at the 2019 RGCD 16K C64 contest and was selected by Freeze magazine as the game of the year for the Commodore 64, will soon be available in a version for Game Boy Color. Game designer and programmer Simon Jameson, in cooperation with the guys from Bitmap Soft, have announced a quick port of this unusual game on this handheld platform.

The main feature is the ability of the protagonist Doc Cosmos to move between two time periods with an alien device (time machine), for which he arrived on an alien planet, found it, only to get stuck in a bunker. Each time period is designed in its own graphic style: one in a deliberately primitive style, the other in the form of neat pixel art. Where one has only bare spikes, the other may already have a bridge built. But the first may have stairs, which have been removed afterwards.

Between periods you have to move around in search of a path to further advancement - in the manner of a similar switch between reality options in the 2018 ninja-platformer The Messenger. To get out of the underground complex, the hero will also need to look for multicolored keys and unlock the doors blocking the passages. And of course, don't forget to recharge the fateful wonder car!

You can pre-order the Doc Cosmos port for Game Boy Color now for just £40. Pennies, eh? There's also an opportunity for die-hard fans to take part in a £5 quiz and win a tweaked and pimped-up version of the console. Well, you can download the 2019 original for free on the game's page.