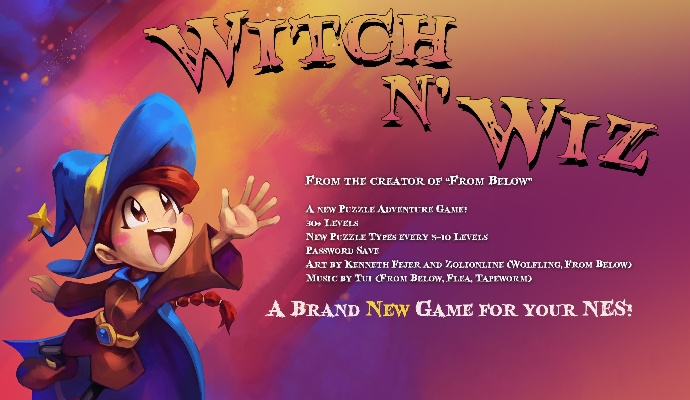 And yet good games for the NES (aka Famicom, aka "Dandy") have some very special ineffable charm: in the color combinations, in the palette of musicality and even, if you will, in the flavor of the electronic-game dialogue process. There's something so juicy, dreamy and lulling about it all. This is especially true for PAL versions of the console, in which time flows a little slower, making all non-adapted games play as if in a kind of dream. By the way, a similar effect could be observed in the Russian adaptations of Disney cartoon series' splash screens, for example, in the credits of Chip and Dale.

Experienced programmer and game developer Matt Hewson, apparently, is also a supporter of such views (although I don't think he ever experienced this our PAL-trip), because as his last year "cthulhu"-tetris From Below (which was just a sample of the pen), and the colorful new puzzle-platformer Witch n'Wiz - both of these games fully possess the degree of fairy-tale juiciness that is so characteristic only of the platform's best works. 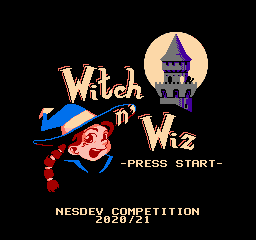 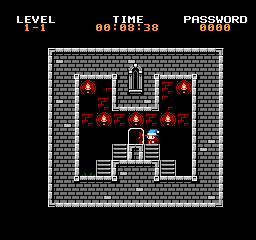 In this game, you'll have to help a young Witch go through a series of trials in a haunted dungeon, free the Wizard, and help them escape to freedom together. In the process, the heroine will also create a shadow copy of herself and she can be used to solve problems. In each level you have to push the pentagram boxes so that you get to all the ghosts. When there is an Exit in the level, you will additionally need to lead all characters to it. Sometimes the Exit can be closed and locked to the Key, which must first be pushed to it. With the "B" button you can cancel the last move, with the Select button you can restart the level, and with the Start button you can get to the menu. In addition, a numeric password system is available, which is displayed at the top right during the game.

It is interesting that the current available version of the game is not the final, and is, according to the author, only a spin-off or even a demo (oh how!) of the upcoming full-fledged adventure. In which there will be much more game mechanics and scripted moments. This one has only about 30 levels and a couple of nice surprises. It was created as part of the NESDev 2020/21 contest (which we'll write about separately), came in second place (out of 16), and was limited to 64 Kb of memory. The real origin of Witch n'Wiz can be considered free cartridge for the miniaturized (by resolution - only 128x128 pixels) virtual console PICO-8. Now it's clear where the legs are growing from. 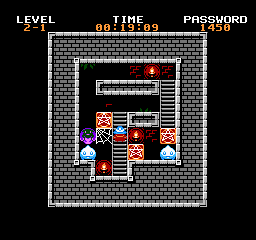 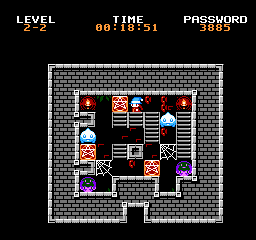 It is also clear that the game runs perfectly on a real console. The graphics are drawn by Kenneth Feyer and Holler Zoltan. The music is composed by one Tui. The author promises a full version release in the summer-fall of 2021. You can download this contest version on the game's page or directly from "Perfect Pixel". Just stock up emulator newer - say, Messen or FCEUX version 2.3 or higher, because the game uses not the most popular mapper and older emulators can simply glitch.

We advise to switch on the "Dandy" mode (you can find it in FCEUX) and enjoy great music in the menu at an ear-pleasing playing speed. And yes, this speed was even lower than in PAL mode.

And, by the way, the game already has one active fan. He even gave the heroine a name - Meyi - which the author liked and publicly canonized.