Thingummy is a game from the creator of Sonic 3D and Mickey Mania, ahead of Lemmings! 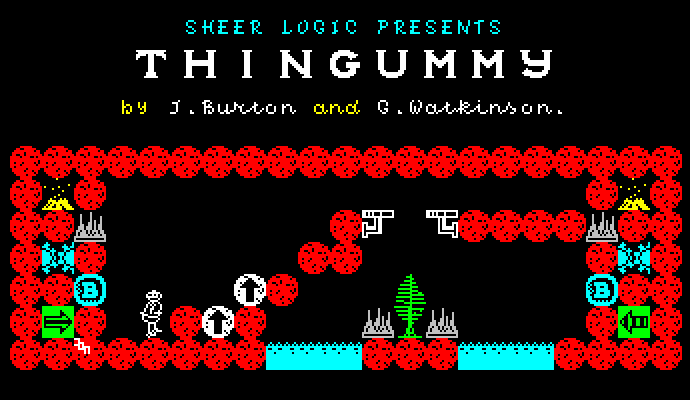 Excellent programmer John Burton (founder of Traveller's Tales studio, which worked on Sonic 3D Blast, Mickey Mania, Toy Story and Crash Bandicoot: The Wrath of Cortex) on his GameHut channel released a video about his old ZX Spectrum game that he created with Graham Watkinson.

Thingummy, which is the name of this arcade puzzle game, was originally written by Graham in Basic. But John liked it so much that he personally rewrote it in Assembler, and the partners tried to sell it to Firebird. Alas, the publisher finally rejected it and Thingummy was not released until 2021. A pity, because by and large the game was a truncated version of the famous Lemmings... three years before its release! 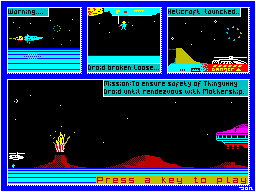 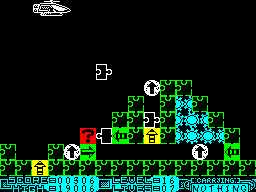 Yes, the gameplay of Thingummy is very similar to the classics from DMA Design, only here you control a helicopter, which is trying to save a droid that fell from a spaceship to the planet. The poor guy is not very smart and can only go forward until he meets an insurmountable obstacle (i.e. above one block) or falls from a great height (i.e. from two blocks and above). For the droid to survive, you have to throw special blocks in front of it, allowing the iron to go up. Or prevent it from stepping on spikes (apparently, made of some very strong material). Or preventing him from falling into the water. Or cushioning the fall from a great height. In general, our dummy can die in a bunch of different ways (just like lemmings!), but there are usually very few ways to escape.

For 1988 Thingummy is very good looking, well controlled and generally feels like a complete product that could be sold for full price. The game has only one serious flaw - it's very complicated and doesn't explain its rules to the player at all. As a result, the behavior of both the main character and most of the objects can only be guessed at. Or rather - to learn about everything by experiment, time after time passing the same level. On emulators with the ability to save the state at any time is not a very big problem, but on a real computer, the constant repetition of the traversed could surely tire you out. 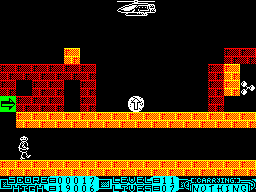 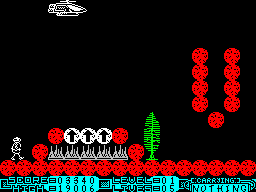 In this sense, of course, Lemmings was a much more balanced game, but Thingummy is also worthy of the closest attention, because the similar genre on ZX Spectrum (and on other platforms, frankly) is poorly represented. Basically, if John ever wanted to return to his brainchild, it wouldn't be too difficult to improve it - it would be enough to simplify a little the process of raising / lowering blocks, add an indicator of the place where the block would fall, explain more distinctly the rules of droid's behavior, and distribute a few training levels in the game, which would teach the user how to use various blocks and objects on the screen. It's also possible to plow through all the levels, making the difficulty level increase smoother, but this is a more complicated task.

Well, you can download Thingummy from our website and try to pass a few levels by yourself. And then make sure to watch this 13-minute video in which John goes into more detail about the making of the game and tries to pass it himself, albeit not the whole game: