The legendary Apogee brand returns - with announcements for the year ahead! 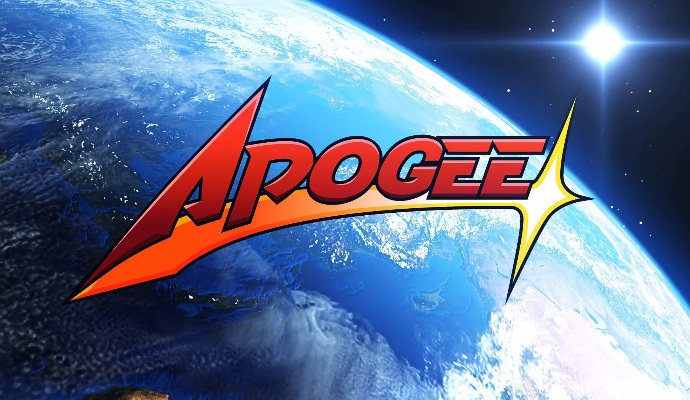 They're back! After 25 years of oblivion, the Apogee brand that brought a fair amount of awesome-quality MS-DOS platformers (and more) to our merry world in the early '90s is back as a revitalized Apogee Entertainment. It was announced earlier this week, April 20, by Scott Miller (the founder) himself, with the first blog post on the company's new website: "Apogee is back. It all started in 1987". Toast!

Let's face it - it's about time. Because just today, the means of making games have improved so much that almost everyone has the ability to quickly mold and distribute something playable. At the same time, however, there are very few artists who are able to see things deeply and understand how to make a unique and integral star (or even a whole star) from a playable creation with the right strokes which will bring us the purest joy of contemplation, and not just this banal "fun". It's also called injecting your soul.

It is now, at the apogee of turmoil, that we see a new flowering of various retro-communities, including those interested in retro-computers and computer games in particular, in a blind attempt to re-find the right spiritual reference points. There is a crisis of ideas and a desperate attempt to escape from a complete descent into, so to speak, a total simplification of content. That is where the experience of game industry veterans, pioneers of the distribution model "with subsequent payment" (shareware) and, one might even call it, ideologists of a whole generation of hit games, and just very good developers-creators, turns out to be extremely relevant!

Scott Miller immediately stressed that Apogee Entertainment will provide support only to the very best, extremely talented indie developers, whom the company will help with the promotion of specific games in the market, advertising and publishing issues. And with a focus on innovative and interesting gameplay. You can also ask for help with porting, testing, and localization. Or ask for advice. So Apogee is going to take on the role of a flagship in today's chaos of the indie game industry, rushing the fastest to new horizons, lighting the way and, in fact, helping others to stretch further and get stronger. 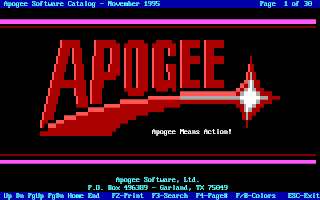 Interestingly, the current name of the main company, 3D Realms, is not legally and has never been the name of the company itself. It was chosen as a catchy dba-brand (doing business as) for releasing 3D games specifically, starting with the dizzying Terminal Velocity of 1995. The real name is still the same - Apogee Software Ltd. So it turns out that Apogee Entertainment is also such a new brand, in this case for small indie projects, including (and especially) 2D ones. After all, under the brand of 3D Realms in recent years, an active development of 3D shooters is underway, just think of Ion Fury, Wrath: Aeon of Ruin or, say, the hotly anticipated Graven. Comrades even promise a relaunch of the shooter SiN called SiN: Reloaded. And there's been complete silence about 2D games since the 2014 pre-box compilation 3D Realms Anthology. Looks like the time has come!

The classic two-dimensional games by Apogee Software can be talked about for a long time. It's a special kind. The cartoonishness of the characters, the soft AdLib voice acting (sometimes with a touch of acerbic sound effects via PC Speaker) and the colorful graphics (and 16 EGA colors was the only way to do it well) did not prevent them from being solid and serious enough for the player to plunge into even the craziest game scenarios. The Martian bases in Monuments of Mars, the Pharaoh's Tomb in Pharaoh's Tomb, the Arctic treasures in Arctic Adventure, the boomerang prince in Dark Ages, the crystal caves and secret bases in Crystal Caves and [Secret Agent](https://store. steampowered.com/app/358350/Secret_Agent/), chasing Dr. Proton in the original Duke Nukem (originally Duke Nukum in general), saving Cosmo's parents in the charming Cosmo's Cosmic Adventure, mutant invaders in [Bio Menace](https://store. steampowered.com/app/358180/Bio_Menace/), cute Halloween and animal rescue in Monster Bash-and that's only about half the stories. You can learn more about the nuances of the story and the development details of Apogee Software's entire line of games in a very detailed article from Joe Sigler. For example, it was he who suggested putting a file_id.diz file with a piracy warning on all Apogee games, without which these games would not run.

Getting back to the announcement, the suddenly resurrected Apogee Entertainment immediately broke out the games premiere trailer for the year ahead, with a welcome and conclusion from John St. John (the same voice of "Duke" Duke Nukem). From 3D they showed some kind of zombie shooter (they even added a symbolic rabbit, but where's the promised innovation?) and a technological occult shooter in some kind of cybernetic gothic scenery (probably about an evil AI). The apogee, you say? Of darkness? Of the two-dimensional flashed two something about dungeons (average, to be honest), a platformer about survival on a planet Residual (it was already announced by the second trailer, only this... another survival crafting game?), cosmetic remasters Cosmo's Cosmic Adventure and Monster Bash (bearable), and something very similar to the already released Crystal Caves HD (probably the HD version of the second part). At the end they diluted a new version of Raptor: Call of the Shadows with a very nice effect of clouds reflecting in the water. To put it bluntly, it's not pretty for a flagship, and for now the only hope is for the new developers. Go for it! John promised more announcements in the coming months and also invited everyone interested to the Apogee channel on Discord, where both Apogee staff and himself are sometimes present.

You can watch the trailers and follow the news on the official website Apogee Entertainment or directly from us at Perfect Pixel, because the topic of interesting pixel games is exactly our profile.

The first game announced is Residual:

Oh, that's where that picture came from: 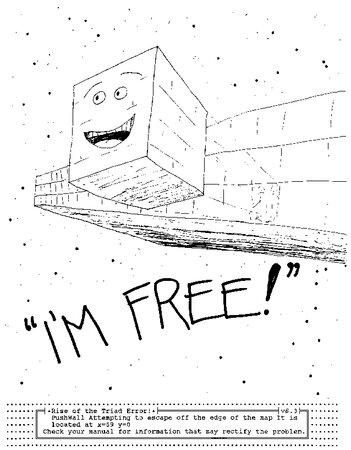