Ant vs. Scorpions - a new game for Enterprise is out 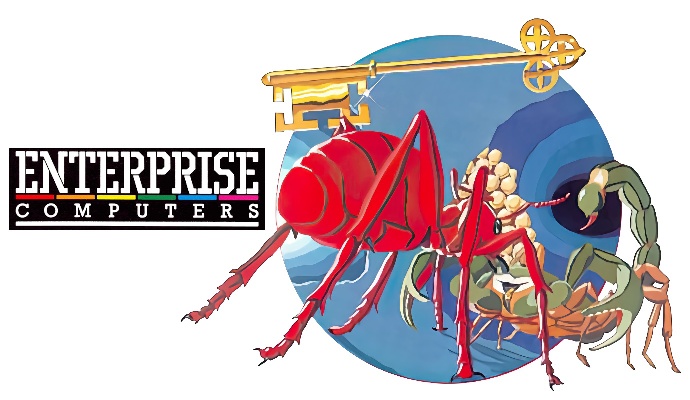 Although the arcade game Fire Ant is not a masterpiece of all time, it is still remembered by people who had it as one of their first games. That's why Geco, the author of most recent ports to Enterprise, decided to port the game to his beloved computer because of his nostalgic feelings. The porting is remarkable, because the Commodore 16 computer uses the MOS Technology 7501 processor, which instruction set is not compatible with the Z80. Because of this the source code, created by the disassembler, had to be translated line by line into the code, understandable to the native processor "Enterprise".

The story begins with the fact that the anthill was attacked by scorpions. Having dispossessed everyone, they kidnap the queen and lock her in the lower levels. The last miraculously surviving warrior ant decides to infiltrate the center of the invaded anthill and rescue the queen. To do so, he must pass through eight chambers full of scorpions, using a variety of objects encountered along the way. Keys open yellow doors, and explosives will make a passageway.

Unfortunately, the game suffers from the shortcomings of many early 80s games. Gameplay is not particularly intuitive; the same items can both kill and be used to overcome obstacles. Most of the enemies move chaotically and because of this you sometimes have to stand in one place for a long time and wait for the scorpions to leave the necessary passageway. As a kind of "cherry" there are also invisible switches, necessary for further advancement. Therefore, for the modern player the first passage will be quite difficult, and the subsequent ones will not seem particularly exciting.

Fire Ant runs on both standard machines (64K and 128K), and you can control in any available way - both using the keyboard and using a built-in or external joystick.

Download the game from "Perfect Pixel" or from Enterprise Forever forum. Discuss it there, too.