Demakes and game adaptations for ZX Spectrum contest has started 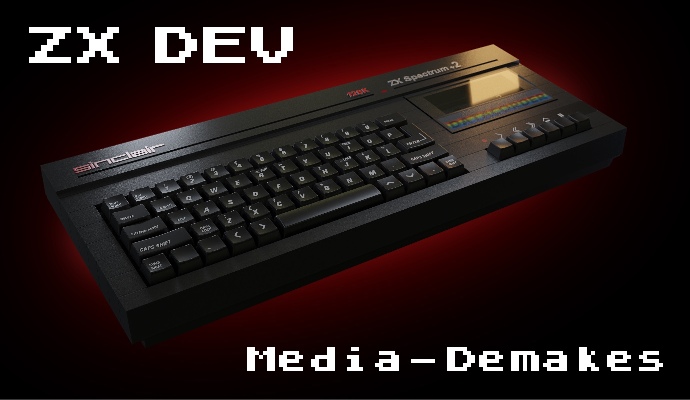 For two years nothing was heard about the well-known ZX Dev contest, the last incarnation of which, ZX Dev MIA - Remakes, ended with a resounding victory of domestic developers (first and third places, by the way).

Fortunately it hasn't died out - the new contest is called ZX DEV Media - Demakes and will accept only demakes of games originally released on more powerful platforms, plus game adaptations of movies, TV series, books, cartoons, comics and so on.

Beyond that, the rules are pretty standard - games must be finished, not previously posted or on sale, work on Spectrum branded 16K to +3, and be understandable to all English-speaking people. Deadline is set for December 2021, after which voting will begin among people who have supported the contest with money or in-kind prizes. You can find out how to sponsor and be on the judging panel here, and you can follow the growth of the prize pool at this page.

So far the good Samaritans donated as much as €1080, some computers and games. I guess they missed ZX Dev! This goodness will be distributed as follows:

Also between the first three the organizers will somehow distribute a set of several games - Tokimal, Anteater and Comeme el Chip.

If fewer than 10 games make it to the finals, only the first three will get money at a ratio of 62%, 26% and 12%. But that's unlikely, because right now, six months before the contest ends, there are already seven contenders on the submissions page, at least six of which are clearly in development.

Alas, it feels like it makes no sense to wait for ZX DEV Media - Demakes to stream cool demo versions of famous hits - among the current contenders you can say that only about Space Racing. Otherwise they were ubiquitous platformers on the AGD engine (or rather MPAGD) and the like. Well, the previous ZX Dev's problems were too "forgiving", and the organizers looked through the fingers at the "Port of a little-known quest from a computer of about the same power" kind of requests. Alas and ah.

So for now the only hope is that the game will again include domestic developers who can bring at least some variety to this AGD-flow. Or maybe we're too pessimistic, and in a few months Media - Demakes will just be bursting with a stream of high-quality demakes and game adaptations of popular franchises. We'll see.

But for now we have what we have. Namely...

A remake of F-Zero from SNES, in which the author will try to implement the famous Mode 7 effect on Spectrum. The game will only run on 128K, and the frame rate is planned to bring it to 8-12. Not much, of course, but it's F-Zero. A few music tracks are also promised.

At the moment, from the ready-made materials we can see the splash screen and a short video with the demonstration of the already cheesy, but recognizable F-Zero's gameplay:

Action platformer based on the "Terminator" franchise on the MPAGD engine. It does not look very representative yet, but the main thing is playability, not graphics. The developer actively posts screenshots and small videos on his Twitter, and recently released a one-minute teaser on YouTube:

A demo of the mobile arcade game Archero. In it you control an archer who runs forward and shoots all sorts of monsters, upgrading his equipment along the way. The Arrow Hunter is developed on AGD, and the only screenshot hints that the author is not going to try too hard to adapt this engine for the original gameplay. Just compare - on the left is Archero, and on the right - The Arrow Hunter: 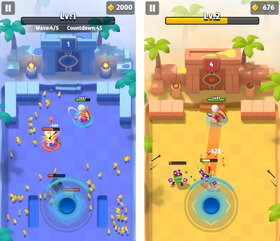 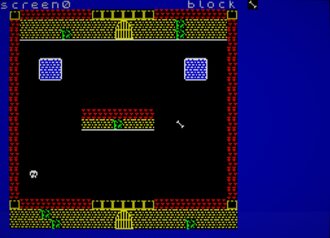 A demake of the metroidvania game of the same name, a very popular and big game. The author uses the MPAGD engine and really wants to cram all the content into 48K, although he doesn't really believe in it. By the way, he hasn't decided on the name yet - for now he's choosing between Empty Knight and Dirtmouth and is open to suggestions.

Of the finished, alas, there's only one grim screenshot: 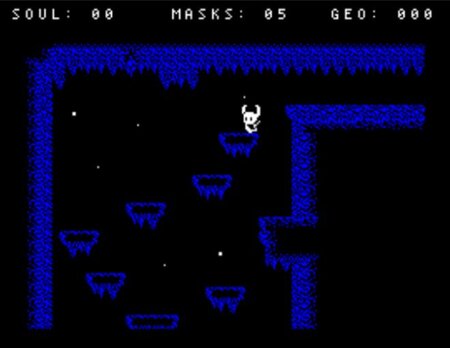 Enigma - From Another World (jesusvf)

A horror game based on the iconic "The Thing." Nothing else is known about the game, there is only a splash screen: 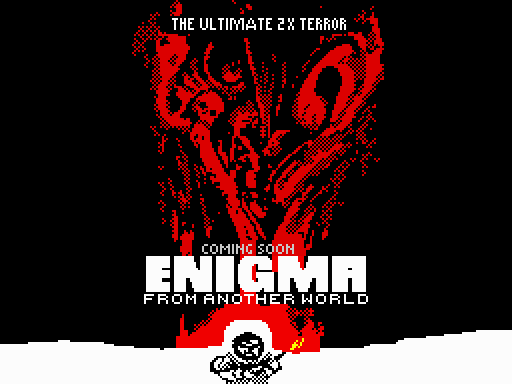 An arcade game based on the movie "Black Sea" with Jude Law and Konstantin Khabensky. The picture told about an international crew looking for a sunken German submarine with a cargo of gold, and the game, judging by the subtitle, will be about the same. The engine - the same MPAGD, so that a fundamentally new gameplay can not wait.

Screenshots in normal resolution and quality the author for some reason did not provide, but posted a predominantly hand-drawn poster: 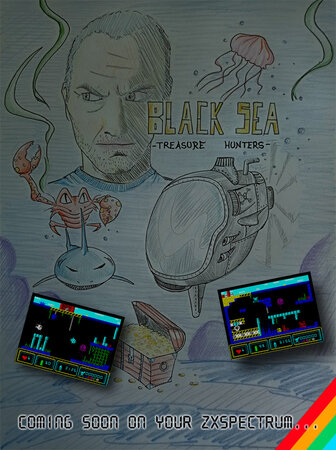 The Curse of the Kings (KMBR)

A text quest, a demake of a Spanish game for Amstrad CPC called El Enigma de Aceps. Specifically, the first part of it (apparently because it's for the Spectrum 48K).